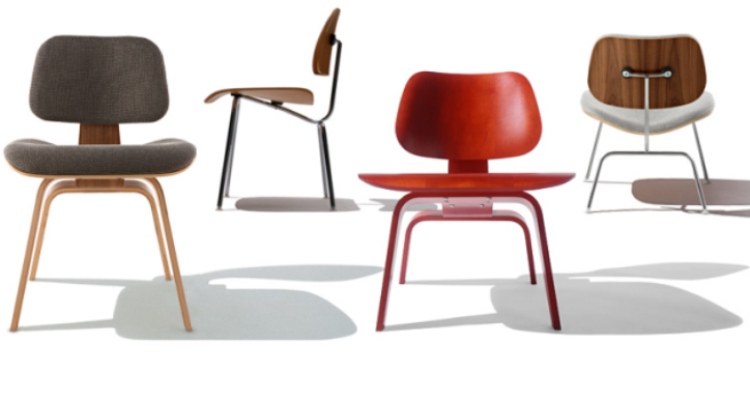 Few designers have been more influential in shaping decorating trends than husband and wife team Charles and Ray-Bernice Eames, whose innovative concepts and creations helped lay the foundation for today’s retro modern furniture.

From the time of their marriage in 1941 until Charles Eames’ death in 1977, the couple collaborated in a wide variety of groundbreaking modernist projects, ranging from architecture and design to photography, exhibitions, and even film production. Their documentary film “The Power of Ten” has been selected by the US Library of Congress for preservation in the National Film Registry.

Among their best known collaborations was the Eames House, built in 1941 as part of an Art & Architecture Magazine case study. The house, which was hand-built in a matter of days using only prefabricated steel parts originally intended for industrial construction, has been recognized as one of the milestones of modernist architecture.

But though Charles and Ray Eames were acclaimed in the fields of art and architecture, their most lasting legacy is in the design and creation of truly modern furniture. Their work was inspired by a design philosophy based on the combination of actuality and functionality; according to Charles Eames, “Recognizing the need is the primary criteria for design”.

For more than 40 years the couple worked to fill the need for furniture that was versatile, attractive, and high quality, but which could also be quickly and easily mass-produced to make it affordable for the average consumer. Many of their most well-known projects focused on designing seating that was shaped and molded to accommodate the human body, offering comfort without the need for cushions and upholstery.

The Eames’ Molded Plywood Chair, introduced in 1946, was among their earliest creations. Its unique combination of style, comfort, and functionality made it an instant hit and the well-thought-out manufacturing process kept it affordable. Many variations inspired by the Eames molded plywood chair are still in production, and the chair remains a classic of retro modern furniture design Optimasi.

After the introduction of the molded plywood chair the Eames continued to design molded chairs, using stamped aluminum and wire mesh in innovative ways and experimenting with new materials as well. Their goal of a creating a chair with a molded single-piece shell that was comfortable without upholstery or padding was realized in the 1950s, with the production of shells made of fiberglass-reinforced plastic. Lightweight, versatile, and affordable, the molded plastic chair has become a design standard and many variations are in production today.

One of the Eames most famous designs is the Swivel Lounge Chair with matching footstool. With a body of molded plywood and deep leather cushions set on a broad, stable swivel base, the Eames Lounge Chair has a sleek yet enveloping style that offers maximum comfort. Charles Eames said he wanted the chair to be “a refuge from the strains of modern living”, and for more than half a century this design classic has been in production.